WARNING:  THIS POST IS LARGELY WRITTEN FOR THOSE WHO HAVE SEEN THE THIS MOVIE.  BELOW I QUOTE DIALOG FROM THE FILM AND DISCUSS SOME OF ITS EVENTS AND CHARACTER MOTIVATIONS

I celebrated the annual 72 hour long Global Shinkai Day by checking out his newest film (at the time of this writing), Children Who Chase Lost Voices From Deep Below.  There is a scene about three quarters of the way through the movie that made me abruptly sit up and hit rewind to make sure I read the subtitles correctly. 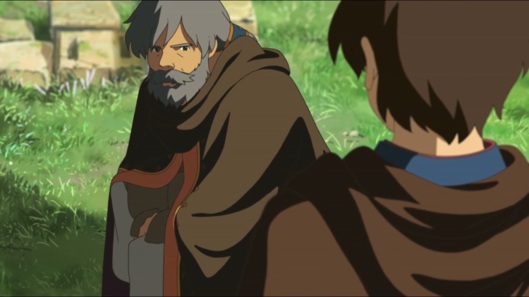 Elder:  And in that way, it becomes part of an even larger life…

Shin:  I wonder if Asuna thinks of it that way?  Even though something precious to her has died…Elder, perhaps it is because Agartha has learned too much about how short and meaningless life is in the present…Isn’t that why it has begun to fall into ruin?

Let me put the scene in a little bit of context.  Asuna’s erstwhile companion, a feral cat sort of thing called Mimi, has fulfilled her life’s duty and then passed away.  Her (Its?) body has been offered to one of the local gods. This god takes the body into itself: it literally eats Mimi’s corpse.  In this way, beings are allowed to become united as one.  Little Mana hugs the god, and it is as if she is hugging Mimi.  Such notions of convergence and unity are present in many strands of Eastern religion/philosophy, and it is this scene that the Elder is responding to in the quote above.

I find Shin’s response absolutely fascinating.  He has just witnessed a physical manifestation of what his own culture/tradition regards as the very events that give life meaning.  Becoming one with the god, that is the pinnacle of existence and point of it all.  Yet, in the face of this sacred, meaning-imbuing occurrence, Shin responds by claiming that his culture is in ruin because they are all too aware of the meaninglessness of life.  He breaks from tradition. While it’s certainly clear throughout the movie that Shinkai is seeking to contrast the old world and the new, I think that there is something quite important going on in this particular instance of that juxtaposition.  Everything’s becoming one does not give Shin’s life meaning, and he believes, whether it is true or not, that other people subconsciously feel the same way.  So, if Shin’s tradition doesn’t give him the meaning, what alternative does?

Before continuing, I want to be up front about a presupposition of this post:  I’m assuming that the main characters in this film are at some point, implicitly or explicitly, searching for their own existence’s meaning and that, in the context of the film, there is meaning to be found.  The scope of the current post does not allow for me to argue the point, so I am simply going to presume that the preceding statement is the case.

I think that Shinkai’s answer to the question “If not the old world tradition, then what is the alternative?”  is present throughout the movie, rather than openly provided at the end, as if the entire film were just this question.  The motivations of the three main characters, especially Asuna, are key.  Shin wants to repay the debt he owes to his caretakers, Morisaki yearns to be reunited with his dead wife, and Asuna desires to climb out of the life she is drowning in and ease her aching loneliness.  What is the commonality between these motivations?  What do these people want?

Acknowledgement by another.  Connection.

Anyone who has seen any of Makoto Shinkai’s other films knows that he likes to create stories about connections.  In Children Who Chase Lost Voices, I think he is looking at traditional Eastern myths/religions/philosophies and their ideas of oneness and saying, “No, you’ve got it wrong.  That’s not what a connection is.  That’s not what people want.  That’s not what people need.”  People seek acknowledgement from what continental philosophers refer to as “the other;” they want to remain themselves, separate and distinct, and have the totality of themselves acknowledged by another self.  Merging one self into another self isn’t making a connection, it isn’t acknowledgement; it’s losing one being at the expense of another.  One self is going away.  The very ideas of connection and acknowledgement entail two distinct, persistent entities.  Connection is one hand holding another without melting into it.  Acknowledgment is one self really seeing another self and nodding with approval.

As previously stated, Shinkai contrasts the old world with the new in several different ways in this film.  Shin believes that the old world’s orienting story of oneness cannot satisfy the desire for meaning in citizens of the new world.  In Asuna’s connection with Mimi and his own connection with Asuna, Shin experiences what can imbue modern lives with meaning: knowing others and being known by them.

One thought on “What We Chase”